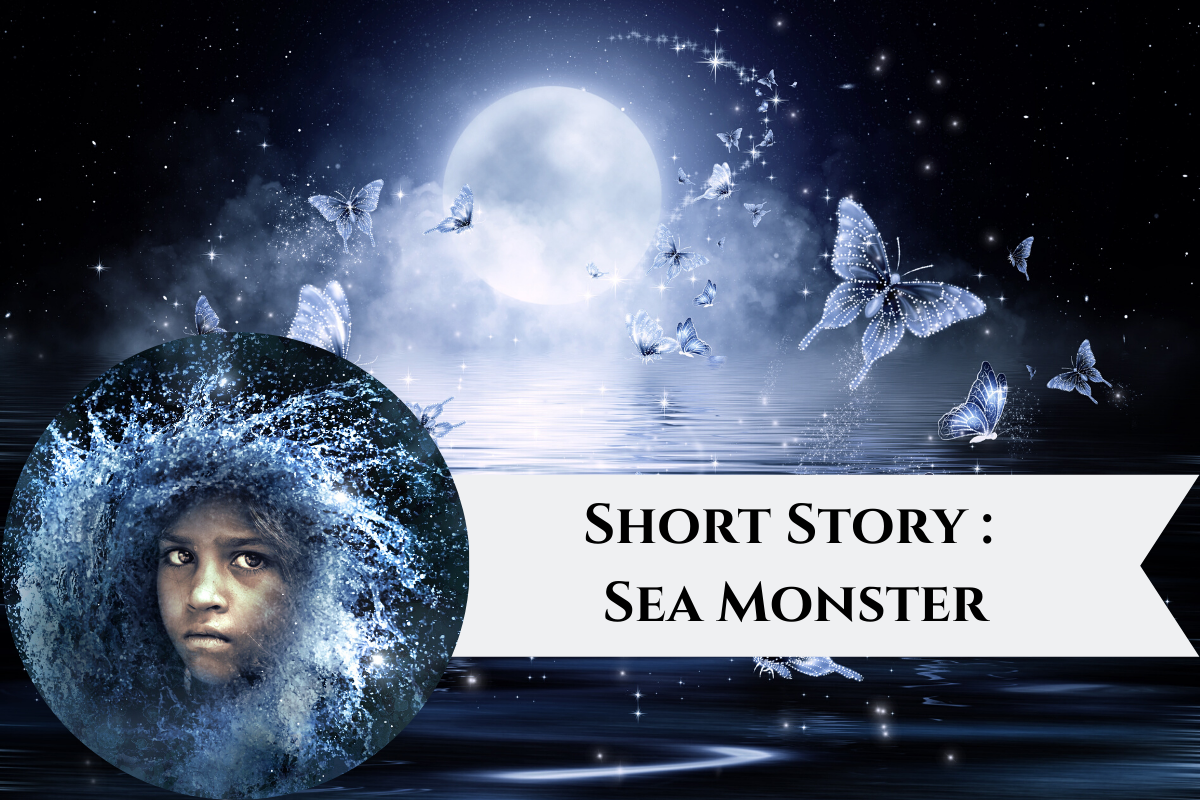 Sista’s favourite place to play was the beach. She loved to run at the water’s edge, racing the waves. She loved the feel of sand getting between her toes. She loved to stand at one place and let the waves take away the sand near her feet and make her sink a little each time. She loved exploring every inch of the beach. If she was lucky, she would find some shells or some shiny stones in the sand. Occasionally she would find abandoned objects at the beach. It is said that the sea never takes anything. Whatever goes into the sea with one wave, will return with another wave.

Overtime Sista’s toys collection grew from the things sea sends back on the beach when there is no one to look for them. She found many slippers. She kept some pretty ones for her mother. Then there was a steady supply of random accessories like bags, scarves, occasionally broken pieces of cheap plastic ornaments. These were things that Sista liked.

But most days she would find plastic bottles, styrofoam containers and so much more other garbage.

One morning Sista was first to reach the beach after a major storm. She found the beach covered with items sea had returned. She screamed in excitement and ran towards it in full speed. For her, this was nothing short of a dream come true. She could not wait to go through everything and see what treasures she could find today.

A strong foul smell hit her as soon as she reached the items scattered all over the beach. It reminded her of the dead dog she saw on the road a few weeks back. Maybe there was another dead dog buried somewhere in all this. Ignoring the smell, little Sista started the mammoth task of going through the waste deposited by the sea.

She quickly understood that this was not like other times. This time sea was not returning an occasionally misplaced spectacles or scarf. This garbage was deliberately thrown into the sea and now the sea was throwing it back.

Sista was finding plastic bottles, styrofoam containers and cup everywhere. In one section Sista found chips packets like the ones usually found in the shops near the beach. She loved those chips. But these packets were empty. Everything she touched felt slimy and sticky. The smell that reminded her of a dead dog was following her everywhere she went on the beach. And so far the only thing she found that she like was a broken pot which had yellow and red flowers painted on its whiteish surface. Like everything else, this too was covered in a blackish gooey thing. She cleaned it the best she could then decided to go back home. This was no fun today.

Sista didn’t realise how far on the beach she had come in what she thought was a short duration of time. Her trek back was long and treacherous. She kept slipping on various things. She noticed scratches all over her bare arms and legs, must have been made by some pointy objects thrown all over. Now she really wanted to go back home to her mother.

Coming down this garbage hill was easier than climbing up. She kept slipping. She could feel her breathing get strained by all the efforts. Panic had started to set in. Everywhere she was seeing things that shouldn’t have been here. Somethings were broken beyond recognition.

Suddenly she stepped on a broken glass piece and screamed in pain. She has had enough of the beach and everything the sea was washing on its shores. She kept moving forward with tears streaming down her face.

With an injured foot, she was losing balance again and again. It was like the garbage was rising and trapping her. Like some sea monster who was tripping poor Sista. But our little Sista was very brave. She kept walking. Every time she tripped over bottles or fishing nets, or other random articles, she kept thinking that it was a monster trying to capture her and keep her from going home.

She was climbing the garbage mountain as best as she could. He tiny feet were not able to navigate with a lot of ease. She kept slipping and having to try again. It was her sheer desperation was keeping her moving forward.

When she was just a few feet away from the edge of the garbage, her foot fell on something soft and squishy which collapsed under her. The entire garbage mountain then came tumbling down on top of her. She could see a horrible face hovering just in front of her. There were a lot of wires and some fishing nets that trapped one of her foot as she struggled to get free. The more she struggled the more garbage would come on top of her.

Eventually, the fear got the better of her. She stopped struggling and got unnaturally still. She was waiting for the garbage monster to consume her completely. She was done fighting.

The moment when we decide that we can not fight anymore is the precise moment when we need to give one last push. Maybe Sista knew that or maybe she had more fire in herself than she realised. Because she did give one more push. One more attempt to escape.

Her push was not strong enough to move the monster from top of her but something must have happened. Suddenly she was able to see better. Light. The light was coming from a tiny gap in the pile of garbage. That little beam of light became Sista’s centre of focus. Her limbs were still trapped but it felt like she was moving towards the light by the sheer power of her mind. She was afraid that if she stopped looking at the light, she will get sucked in the darkness from which she would never be able to come out.

Sista was regretting coming to this beach today. She was regretting trying to play in something so sinister. Most of all, she was missing her mother. She would give anything to hug her mother once more. Maybe the universe was listening to her simple desires or maybe some god somewhere finally had mercy on this little girl or maybe it was just pure luck but suddenly Sista’s wish came true.

She saw her mother’s arms parting the garbage pile and reaching down to her. Sista grabber her mother hands like if she let go she would be lost forever. In no time Sista was in her mothers embrace. Her mother was weeping and saying something in between her sobs. Sista had no idea what her mother was saying. All that mattered right now was that she was with her mother again. She didn’t have to worry about anything anymore. Her mother would take care of everything.

Sista was safe – for now at least.

You can see Sista’s sea monster yourself at Sensistan.

Interested in Sista’s adventure in Sensistan? Signup to the monthly newsletter to get an update when the next story is posted.