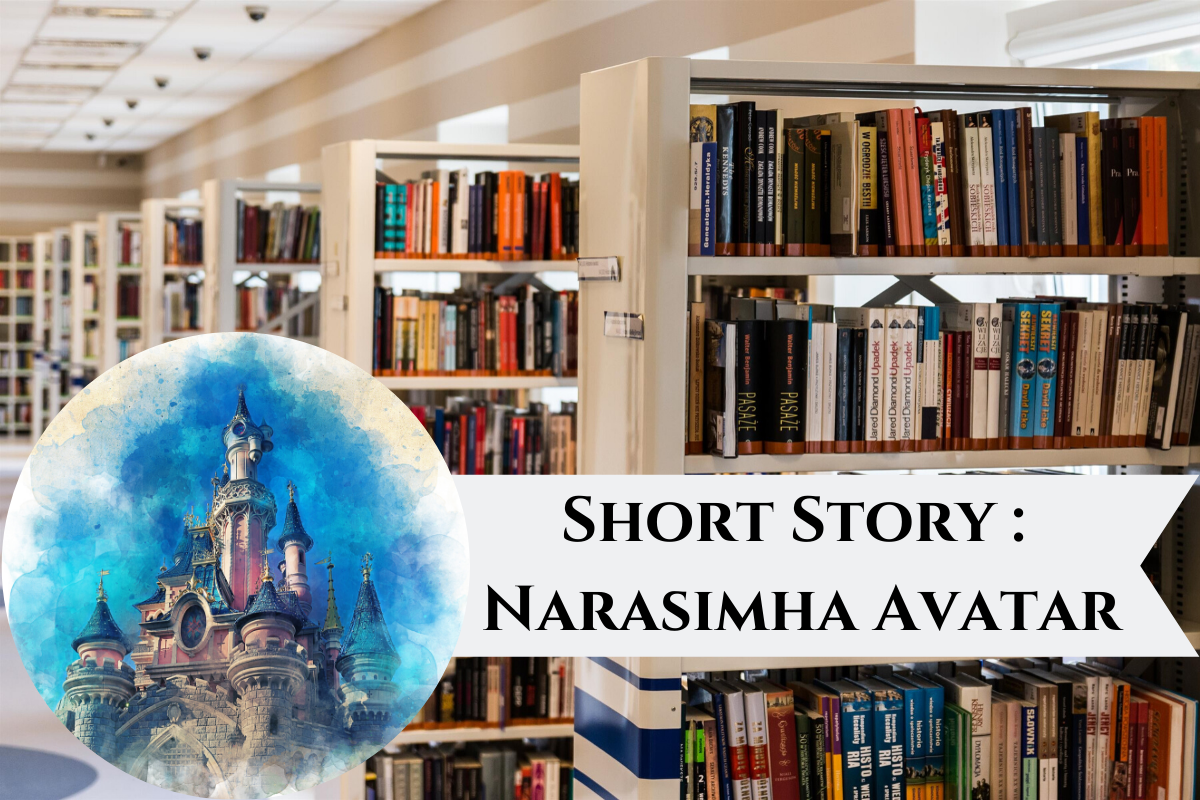 When Brahma appeared in front of him and asked what he wanted, he was prepared. After learning about what transpired when his brother was asked the same question, he was better prepared.

He knew boon for immortality will not be granted. But like his brother, he planned to navigate through it. He asked not to be killed by any man or animal created by the gods. He continued to add conditions to make his death impossible. He wanted not to die during day or night, neither inside or outside, neither on land nor in the air, neither by any kind of weapon.

Once he was granted this boon, he was as good as immortals. Conditions for killing him were not easily fulfilled.

While he was away from his home doing tapas to gain boons, his home was attacked by Devas who wanted to kill his wife and his unborn child. But at the last minute, they were saved by Narada – a Vishnu devotee. Narada told the Devas that Hiranyakashipu’s wife and child have done nothing wrong and that it will be a sin to kill them.

This stopped the attack and Narada continued to take care of the pregnant lady. Narada would continue his Vishnu worship every day and this impacted the unborn child as well.

When the baby boy was born he was named Prahlada. He grew up to become a Vishnu devotee much to his father’s annoyance. Hiranyakashipu was still angry at Vishnu for killing his brother. When he saw his son worshipping Vishnu, his anger knew no bounds.

He wanted to kill his own child but didn’t want to upset his wife. He was also afraid that his subjects loved Prahlada too much and they might start a revolution if he was killed.

So one day His sister Holika came up with a solution. She had a shawl which was blessed to be fire-resistant. She said they would prepare a huge pyre in front of everyone. She will then sit in the pyre along with Prahlada and fire would be set. It would be told to the subjects that Holika will be chanting King Hiranyakashipu’s name while Prahlada will chant Vishnu’s name. The one stronger will save their devotee.

Since Holika had a fireproof shawl to save her, the plan will not only kill Prahlada but also convince his subjects that Hiranyakashipu is indeed greater than Vishnu himself.

On the said day pyre was prepared. All the subjects had come to see the ceremony. Some believed Hiranyakashipu to be greater than Vishnu while others were Vishnu devotees. But no one wanted to see a small boy die.

When the fire started, Holika entered it along with Prahlada. At this time, Vishnu used a gust of wind to transfer the fire-resistant shawl from Holika to Prahlada. Thus nothing happened to Prahlada but Holika burnt to her death.

We still celebrate this day as Holika Dahan in many parts in India.

Hiranyakashipu was now angry beyond reason. Not only he had lost his brother, but he also lost his sister and his disobedient son was still alive and still worshipping Vishnu.

Now he was ready to kill his son himself. He brought Prahlada to his courtroom and gave him one last chance to change his devotion to him instead of Vishnu. When Prahlada refused, Hiranyakashipu mocked him to call his Vishnu to come and save him.

As he leapt towards Prahlada, the main pillar in the courtroom burst open and Vishnu in the form of Narasimha came out of it. Hiranyakashipu was now scared. His boon covered all humans and animals. It did not cover a half-human half-lion hybrid. But still, there were other impossible conditions to fulfil before his death.

Vishnu knew this and thus proceeded to pick Hiranyakashipu up in the air and brought him to the doorway. At the doorway, they were neither inside nor outside. Narasimha then proceeds to place him on his lap which was neither land nor air and as the sun was setting and night approaching during the dusk, he proceeded to use his paws to tear him in two pieces.

Thus, Vishnu fulfilled all the conditions required for Hiranyakashipu’s death and killed him and saved his devotee Prahlada.

This story has a lot of things to consider. In the evolution scale, it describes the time when humans were still evolving from apes and could be thus classified as half-humans and half-animal.

The villain challenged the status of Gods themselves. He wanted to become a God and wanted to be worshipped. Narasimha might have killed him, but he was more scared of Prahlada or rather unshakable devotion of Prahlada. Narasimha did not come when Hiranyakashipu was terrorising. He came when he was about to kill Prahlada.

To save one’s devotee God came. The evil was in the form of someone who desired to become like God and wanted to scare his subjects into worshipping him. He wanted God-fearing worshippers. While Vishnu prefered God-loving devotees. That’s why he came himself to save Prahlada.

In many mythologies, it is mentioned that God is only as strong as his believers. This story shows that true believers are protected by Gods. Vishnu is a particularly protective God and many stories show him saving his devotees from facing unfavourable ending or untimely demise.

0 comments on “Narasimha Avatar – Story of a true devotee”